Named “Haemmerlé Garden” at the time after a former owner, the place was not occupied by the Racing but by FC Frankonia, who rented the field from the manager of the restaurant located at its entrance.
At that time, the Racing played a few hundred meters away on a pitch that was neither developed nor functional.

It was in 1914 that the Racing team managed to convince the owner to lease the Hämmerle garden to them. FC Frankonia also fought against this legally. However, the appeal was dismissed on April 14, 1914.

Racing was able to move into its new home for an annual lease of 300 Reichsmarks, but not for very long. On August 3, Germany declared war on France.

After the First World War, an important milestone was reached in 1921 with the construction of a wooden grandstand with 800 seats (north side), which was built voluntarily by the club members themselves.
And it was during this construction that the Haemmerlé Garden was given the name Meinau Stadium.

In the early 1930s, the Racing established itself as the most important football team in the city and then in the region. By extension, this was also the case for the stadium, which became the point of reference for all those wishing to see football in Strasbourg.

Emile Mathis played an essential role in this: the large automobile manufacturer, who owned a factory a few hundred meters away, financed the construction of the second wooden grandstand opposite the first. The grandstand with standing room for 2,000 was inaugurated in 1933 and played an essential role in bringing together the most enthusiastic supporters for nearly 50 years. It was the first people’s stand in the Meinau Stadium.

THE WORLD CUP IN STRASBOURG

In May 1938, construction on the stadium was completed for the match between Poland and Brazil during the World Cup in France: new stairs were built, the stadium corners were renovated, the locker rooms modernized and new telephone lines were installed to broadcast the game live to Brazil.

In July 1940, after the annexation of Alsace by Germany, the Racing became Rasensport and participated in the championship organized by the German Federation. A team from the Nazi regime also participated: FC Frankonia becoming the SS team.
The two competed against each other four times at the Stade de la Meinau and not once did the SS team win.

A renovated stadium with 30,000 seats

A few years later, a new grandstand with 2,500 seats was built (north side), along with stands added behind the goals and a new running track. This construction required shifting the lawn 9 meters towards the North stand and 12 meters towards the West stands. 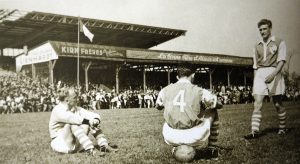 Seven apartments were also integrated behind the first tier of the new grandstand. They were reserved for the players during the housing crisis in Strasbourg at the time.
The stadium, which can now accommodate 30,000 spectators, was completed in September 1951.

THE MEINAU GETS MODERN

At the end of the 1970s, the aging stadium was renovated due to the new sporting revival of the club. The major project began in a first phase in April 1979 with the renovation of the west stand, which also housed the club’s offices. 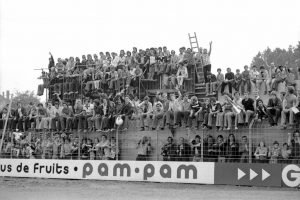 The construction was carried out in several phases until 1984 in order to limit the consequences on the ongoing matches. A modern stadium was then born, unanimously recognized as one of the most beautiful in Europe. 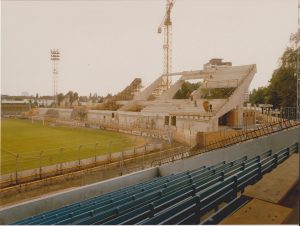 At the end of the 1980s, 26 boxes were added in the upper area of the south stand to open up new revenue opportunities for the club. 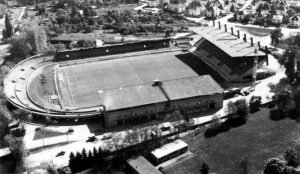 Even if the club’s sporting successes were modest, the Stade de la Meinau experienced a few highlights:
– Strasbourg was the venue for two matches of the European Football Championship in 1984. The match between Germany and Portugal was especially remarkable, where the previous record was set on June 14, 1984 with 44,766 spectators (including 20,000 Germans and 10,000 Portuguese).
– On the occasion of the 2000th anniversary of the city of Strasbourg, the Finals of the European Cup Winners’ Cup in 1988 was held in the Stade de la Meinau, in which Ajax Amsterdam and KV Mechelen faced each other. On that day, fans traveled to Strasbourg with 600 buses from the Netherlands and Belgium and 152 buses from France. 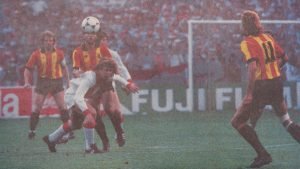 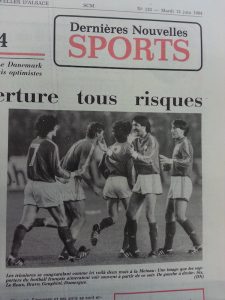 In spring 2001, due to new safety regulations, the stadium capacity was reduced to 29,000 seats, old barriers were replaced by a pit and a new video surveillance system was installed.

During the bankruptcy filing in 2011, moving out of the stadium was considered for cost reasons. In the end, however, the decision was made to stay true to the location – and rightly so: the matches at the Stade de la Meinau continued to be very well attended and the spectators did their part to ensure that the club regained its former strength. The 2018/2019 season was thus marked by record occupancy with 18 Championship matches out of 19 sold out, with the second-highest number of spectators after PSG.

Working with local governments, a project to extend and renovate the stadium is now underway. When the construction will be completed, the stadium will hold 32,000 spectators.

Extra-sporting events also took place there: when he came to Alsace in October 1988, Pope John Paul II spent an evening and a morning in Meinau, twice filling the stadium.