An anchored and active club in its territory, Racing Club de Strasbourg Alsace tries to stay close to its supporters and takes its role as a social and societal link to heart.
In this sense, Racing seeks out its fans during event operations throughout Alsace, at the stadium on matchday, and during other events.

In association with the City of Strasbourg

Each of the 32 football clubs in the city of Strasbourg is assigned a sponsor from among the players in the professional team.

The clubs thus have the option of inviting their sponsor to one of their events.

In addition to this system, each Club is invited to Racing matches to allow their licensees to support the Blue and Whites.

Invitation from the House of Teens

The ‘Maison des ados’ (the House of Teens) is a place of listening, advice and support for young people aged 11 to 25, as well as for their families and loved ones. 200 teenagers are invited to a home league match during the 2019/2020 season.

As part of the “Strasbourg aime ses étudiants” (Strasbourg loves its students) initiative, which aims to promote the role of students in Strasbourg, to unite and support their initiatives, as well as to improve their place in the region, 1000 students are invited to cheer on their new home team at the Meinau Stadium.

This action is begins at the start of the season as soon as university resumes to allow students to discover or rediscover an essential part of Strasbourg life, to share a moment of conviviality and make new friends.

Every summer since 2013, 400 children aged 6 to 13 years play the ‘World Cup’ of the districts of the Eurométropole of Strasbourg with Racing, Ophéa & Habitation Moderne.

The tournament rounds take place in the presence of professional players in the neighborhoods of Strasbourg and the Eurométropole, while a final round bringing together the winners of each pool is played at the end of August at the Racing Mutest Académie.

The Finals allow young people to set foot on the pitch of the Meinau as the curtain raiser for a Championship match in the fall.

All the children leave with a ball and a collector’s T-shirt.

Wet your jersey and decentralized training with Habitat de l’Ill

The “Mouille ton maillot » (Wet your jersey) operation, in conjunction with Habitat de l’Ill, social landlord of Ilkirch-Graffenstaden, allows 50 children of tenants to be trained, on five dates per season,   by Racing players. This action aims to promote the initiation of football and sports in general for young children.

In addition, this partnership makes it possible to offer the children of HDL tenants exclusive actions. Two training sessions of the professional team are relocated to the municipalities in which HDL is present.

Job Racing 67 with the Departmental Council of Bas-Rhin 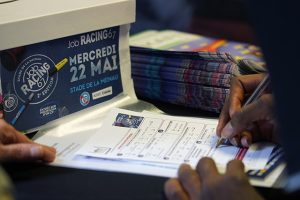 Job seekers and corporate sponsors looking for profiles are brought together by a passion for Racing during a Job Dating day as part of the Job Racing 67 event at the Meinau Stadium.

Last year, on May 22, 1,500 candidates, including 300 RSA recipients, went to the Salon des Trophées to meet 57 Alsatian sponsor companies to discover and apply for 750 job offers.

5 times per season, about twenty children from neighborhood associations are presented with the opportunity to visit the Meinau Stadium and get a real behind-the-scenes view of the club. It is also an opportunity for these young people to discover and understand all the different professions within Racing.