The History of Racing

It all started at the beginning of the 20th century. A group of youngsters from the Neudorf neighborhood enjoyed kicking a ball, which back then, was merely a ball made of rags.

Thanks to their savings and the support of their teacher, they were then able to purchase a proper leather football. Shortly after, that they formed a team and started an association which they called Fussball Club Neudorf.

In 1906, the matches would take place in Polygone, in German Alsace. In 1914, FC Neudorf leased the Haemmerle Garden for 300 marks per year. It was a green plot of land which would later be known as… the Meinau Stadium.

The Birth of “Racing”

After the First World War, FC Neudorf was first renamed RC Strasbourg Neudorf, then Racing Club de Strasbourg. In 1921, the first stands made of wood, started filling  up with supporters who coming to cheer on Racing. Only five years later Racing won their first claim to fame and became Champions of Alsace.

On Saturday, 10 June 1933, at the Restaurant of the Bourse, Racing took a big leap towards professional football after an extraordinary General Assembly. A few months later, the team was promoted to the First Division after playing four playoff matches against Mulhouse (0-0 and 3-1) and Saint-Etienne (2-0 and 4-4).

That was when the miracle happened: SR Colmar liquidated their professional team, and their withdrawal allowed Racing to stay up amongst the elite.

The first trophy and first relegation

Following the worst season in the history of the club in 1951-52, Racing experienced their first relegation from the First Division. A few months earlier the squad had rattled in 3 goals against US Valenciennes, their first victory in the French Cup after two defeats in the 1937 and 1947 finals.

The crowd was ecstatic in the streets of Strasbourg, celebrating the triumphant return of the victorious team. The following years were not so memorable. Strasbourg made it back into the First Division but then dropped back down to Second Division just as fast. Though stadium lights were installed in 1959, it wasn’t until the mid-sixties that the fighting spirit of the team was rekindled whilst competing in the Inter-Cities Fairs Cup.

Fifteen years after bringing their first French Cup home, Racing won the final in 1966 and defeated FC Nantes (1-0) under the guidance of Paul Frantz. The following years were quite dull up until the short-lived idea of merging the team with the Pierrots Vauban.

In 1970, a new entity was created but six years later the club went back to its former identity as Racing Club de Strasbourg. In 1976 the team was promoted to the First Division. With Gilbert Gress coaching, he and his squad thus managed to give a taste of what was to come with Dropsy, Gemmrich, Specht, Duguépéroux, Wagner, Marx, Ehrlacher, the Austrian Schilcher and Ivica Osim, the Yugoslavian magician.

Following their promotion, the team finished 3rd before enjoying one of the finest pages in their history: In 1978-79, the Alsatians proved to be the best and became for the first and only time, First Division champions!

That season would become a reference point. Earning 56 points in total, 63 goals scored and only 28 conceded goals (best defense in the league), and never beaten at the Meinau Stadium, Strasbourg reached the peak of French football and would even qualify for the quarter-finals of the European Cup the following season. The team was disqualified after playing against AFC Ajax, right after snatching up a victory in added time against FK Dukla Prague (round of 16), a 2-0 win after a remarkable second leg witnessed by the Meinau Stadium filled with delirious fans.

Unfortunately Racing would not remain at the top and plunged into a crisis. The 80s would leave nothing but grim memories, and eventually the ‘Blues’ could not escape relegation to the Second Division in 1986. Except from one season back in the First Division (1988-89), the club maintained their Second Division place until 1992.

Keshi and the European Cup

Following a great second-leg play-off match against Rennes, the team won 4-1 including a memorable goal from the late Stephen Keshi. Racing were definitely back at the top of their game in 1992. In 1995, the team secured a place in the final of the French Cup (defeated 1-0) which would allow Racing to enjoy the thrill of the big matches and the European Cup. The team would reach the Round of 32 and were eliminated by the great Milan AC.

Two years later, Racing stayed at the top of the First Division table throughout the competition but then ultimately settled for a 9th place finish after what was after all an exemplary season. Two events would mark a new period in the history of the club in 1997. Indeed, it was the year when the IMG group was chosen by the municipality to manage to the club. And it was also when the squad led by Jacky Duguépéroux, who was the captain of the First Division title-winning team in 1979, won the French League Cup against Bordeaux (0-0, 7-6 penalty shoot-out victory).

The team would have a good run in the UEFA Cup. Indeed, after a successful qualification round against the Glasgow Rangers (3-0) and Liverpool (0-2), Strasbourg defeated Inter Milan 2-0 at the Meinau stadium but fell 3-0 in the second leg. On 25 May 2001, Racing won the French Cup with a victory against Amiens (0-0, 5-4 PEN).

Despite a hellish 2001-02, the team finished Second Division runners-up, thus regaining status among the elite of French football.

The 2002-03 season would not only see the team end in an encouraging 13th position of the First Division table, but also the departure of IMG. A new ambitious managing team took over the club. Egon Gindorf was at its helm, succeeding Patrick Proisy as President whilst Marc Keller was appointed CEO.

The club’s aim in 2003-04, the season for recovery, was to settle in the French football top flight and also to regain the confidence and support of the public. The following season, the club managed to win the French League Cup for the second time. Indeed, on 30 April 2005, Racing, led by Jacky Duguépéroux, defeated Caen (2-1) and thus qualified for the 2005-06 UEFA Cup. The team would reach round of 16. Meanwhile, Philippe Ginestet took over the reins of the club from Egon Gindorf.

At the end of 2005-06, Racing unfortunately finished 19th that First Division season and therefore was relegated to the division below. A year after, whilst Jean-Pierre Papin was at the helm of the team, they succeeded in bouncing back to the First Division. In the summer of 2007, Jean-Marc Furlan replaced Jean-Pierre Papin and was appointed First Team manager. After an encouraging start, Cohade, Gameiro, Bellaid and the other team members would experience a difficult period from March onwards. After a losing streak of eleven consecutive losses up until the last match day of the championship, Racing was demoted back to the Second Division. It was the beginning of a troubled era marked by another relegation in 2010-11, which made the team plunge to the Third Division. It was the biggest demotion in all of the club’s professional history. Various Presidents would come and go, the club was truly shaken on all levels.

At the bottom of the mountain

In the summer of 2011, the club filed for bankruptcy and had no other choice but to start again from the Fifth Division. The team, managed by François Keller, would then succeed in being promoted to the Fourth Division. The club was eventually taken over by Mark Keller and ten other shareholders along with some regional and local support. The aim was to propel Racing back to the top of the French football pyramid. The club was at the bottom of what seemed like a mountain, the only way was up.

The 2012-13 season was a trying one but ended up being a great triumph. After a home defeat against Moulins (0-4) all hope was lost. However, team captain Sikimić and his teammates would finish the season remarkably by lining up six wins and a draw. On 2 June 2013, in the wake of an epic match played in Epinal against Raon-l’Étape (3-2), Racing secured promotion to the Third Division in front of 3000 supporters who were over the moon. Racing was at the top of the Fourth Division table for no longer than the last 48 minutes of the season.

Jérémy Grimm (Colmar) and Dimitri Lienard (Mulhouse) joined the team the following season which was a very complicated one, seeing indeed a battle played beyond the football pitch. Despite François Keller being replaced by Jacky Duguépéroux as team manager, on 23 March 2014 Racing was relegated on a sporting level. The team was however saved on an administrative level thanks to the League of Professional Football’s decision to prevent Luzenac from being promoted to the Second Division (the club from Ariège having no choice but to start again from the Sixth Division).

The promotion to the Second Division was at stake on the last matchday of the following season. The team with the help of new signings such as Alexandre Oukidja, Ernest Seka, Mayoro N’Doye and Stéphane Bahoken, as well as Jérémy Blayac (who arrived in January) won against Colomiers (2-0) but it was not enough. Indeed, Racing finished off the podium at the 4th place.

Back in the professionnel game

The return to the professional world finally occurred in 2016. The climb to the Second Division happened in Belfort (0-0) on the penultimate matchday of the season. Racing had not played at that level since 2008-09. On 26 May, Kleber square was packed with fans to celebrate the happy event.

The club called in a new coach, Thierry Laurey (GFC Ajaccio), to facilitate the promotion to the Second Division. The following players were newly recruited: Kader Mangane, Laurent Dos Santos, Anthony Gonçalves, Khalid Boutaib, Baptiste Guillaume and Jean-Eudes Aholou in January. During that season the main goal was to remain in the Second Division, however, the team supported by their incredible public ended fighting for promotion. The last matchday of the championship was crucial. A victory against Bourg-en-Bresse (2-1) meant that Marc Keller’s club enjoyed yet another promotion two years in a row.

Back at the top tier of French football, the Alsatian club would battle throughout the whole season in order to succeed in remaining in the First Division. 8th of the table right before the winter break with 24 points in 18 days, Racing was on the right track to achieve that goal with the help of Dimitri Foulquier, Kenny Lala, Bakary Koné, Pablo Martinez, Jonas Martin, Benjamin Corgnet, Nuno Da Costa, Idriss Saadi and Martin Terrier. However, a long streak of defeats (6 defeats and 5 draws in 11 matchdays between 17 February 2018 and 6 May) led the team to dive to the bottom of the table.

The miraculous Lienard and the French League Cup

A miracle was needed, and it happened on 12 May. It was against Lyon, a team that was playing for a spot in the Champions League, Racing was still 2-1 down a few minutes before the end of the match. Nuno Da Costa was then brought on and scored an equaliser. Dimitri Lienard then scored a goal from a legendary free kick which not only secured victory for Racing but also survival in the First Division. It was a win that sent the Meinau stadium into ecstasy.

That time the Alsatians would not crack under the pressure despite yet another 7 defeats in a row, indeed they managed to win against Nantes (1-0) on the last day of the season. Racing finished with 49 points, not only guaranteeing safety but also rewarding the public who showed great loyalty throughout the season (18 sold-out games out of 19). Something utterly unbelievable happened on 30 March in Lille at the Pierre-Mauroy Stadium during the final of the BKT French League Cup. After chalking a victory against Lille (2-0), Racing won against Marseille (1-1, 2-4 PEN) and Lyon (1-2) right before notching a win against Bordeaux in the semi-final (3-2). Guingamp was next. Not a goal was scored during the match, but Racing won the penalty shoot-out (4-1). The team qualified for the 2nd qualifying round of the Europa League, 13 years after they last participated in the competition. 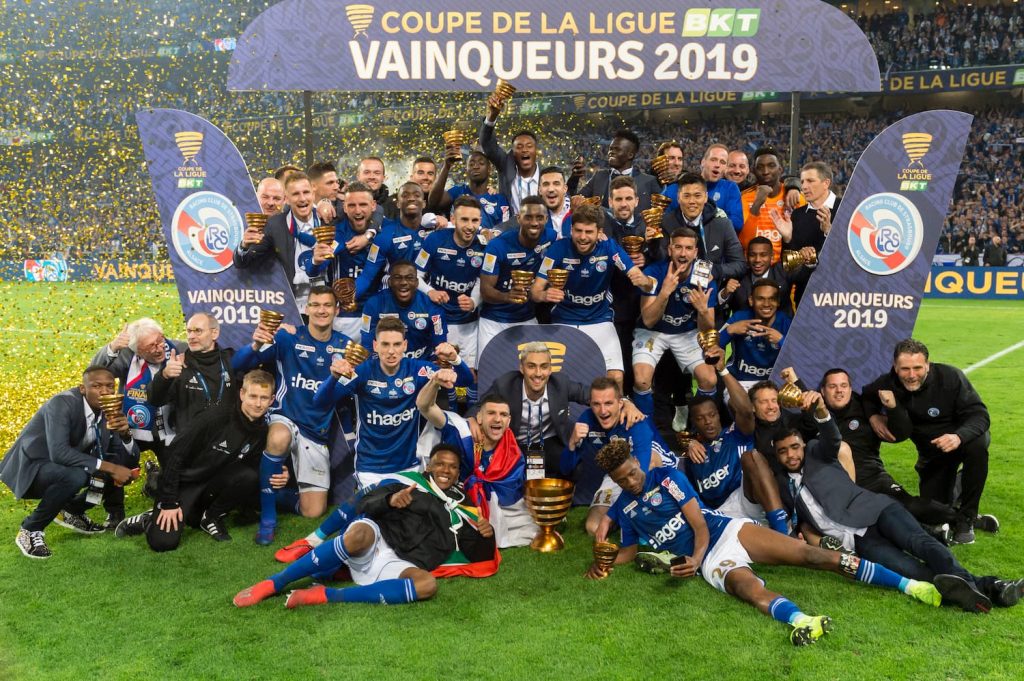